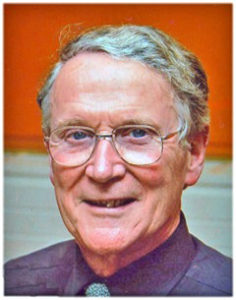 Christopher was born in Hong Kong where his father was the Bishop; Florence Li Tim-Oi may well have seen Christopher as a toddler. Bishop R O Hall ordained her a ‘Priest of God’ in China on 25 January 1944, the first woman priest in the worldwide Anglican Communion. Tim-Oi and Christopher next met during ‘The Peace’ in Westminster Abbey in January 1984 when the Abbey was thronged to celebrate the 40th anniversary of her priesting.

Christopher was a member of the Church of England General Synod for 19 years, elected in turn by the clergy of Birmingham, Manchester and Oxford. He was also a member of the Synod Standing Committee for ten years, using every opportunity to promote the ordination of women. In a debate in July 1975, when the Synod had accepted the ordination of women in principle, he argued that it was then expedient to proceed, just as his father had demonstrated that ordaining Tim-Oi had been expedient to God. 19 years later in Banbury, Christopher preached at the ordination of 11 of the first women to be priested in the Oxford diocese.

The Bishop Hall Legacy Fund paid for Florence Li Tim-Oi’s sister, Rita Lee-Chui, to go with Tim-Oi to China in 1987 where Dr Robert Browne made his film, ‘Return to Hepu’, about Tim-Oi’s life and ministry. Tim-Oi and Rita were both in England a year later for the premiere of Browne’s film, screened for Anglican bishops at the Lambeth Conference in Canterbury in August 1988. 40 years earlier, while attending the Lambeth Conference, Christopher’s father had had a very negative reception from his brother Bishops.

When Florence Li Tim-Oi died in Toronto in 1992, Rita was in touch with Christopher, wanting not just her sister’s memory to be honoured, but for her ministry to be extended into the future in the lives of other Christian women, women who like Tim-Oi needed to be resourced in order to fulfil their vocations. Rita gave the Li Tim-Oi Foundation an initial gift, and although she died in 2016 at the age of 101, her generosity continues to make a difference in the lives of Anglican women.

Christopher served as Hon Secretary of the Li Tim-Oi Foundation for 24 years, based in the home he inherited from Madeleine and Geoffrey Allen, who had taught New Testament to Florence Li Tim-Oi in a seminary in Canton in the 1930s.

On a visit to Hong Kong in 1955, Christopher met a Chinese woman who was being paid 1p for each Irish linen handkerchief she embroidered.  Justice for the world’s ‘should-haves’ has been the primary focus of Christopher’s 58 years in ordained ministry.

This website uses cookies to improve your experience while you navigate through the website. Out of these, the cookies that are categorized as necessary are stored on your browser as they are essential for the working of basic functionalities of the website. We also use third-party cookies that help us analyze and understand how you use this website. These cookies will be stored in your browser only with your consent. You also have the option to opt-out of these cookies. But opting out of some of these cookies may affect your browsing experience.
Necessary Always Enabled

Any cookies that may not be particularly necessary for the website to function and is used specifically to collect user personal data via analytics, ads, other embedded contents are termed as non-necessary cookies. It is mandatory to procure user consent prior to running these cookies on your website.