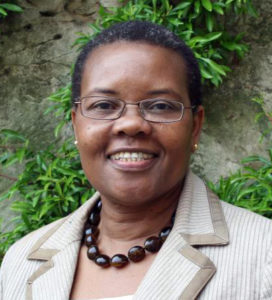 Margaret Sentamu is a freelance Leadership Development consultant with a focus on diversity. She has worked for a number of years in the private, public and third sector which included a period as Senior Selection Secretary, overseeing the team responsible for the recruitment of trainee clergy for the Church of England.  Margaret is a Non-executive director of the Leeds & York Mental Health Trust and previously Non-executive director of Traidcraft Plc, which helps to fight poverty through fair trade. She is also a Lay Adjudicator for the Solicitors Regulatory Authority and a Lay Assessor for CIPFA member accountants who breach the Code of Conduct and bye-laws.  She is President of Mildmay International (HIV/Aids), trustee and patron of a number of charities mainly to do with education, health and poverty in the Global South as well as UK based charities.

Margaret was ordained deacon in June 2019 and is serving her curacy in York.