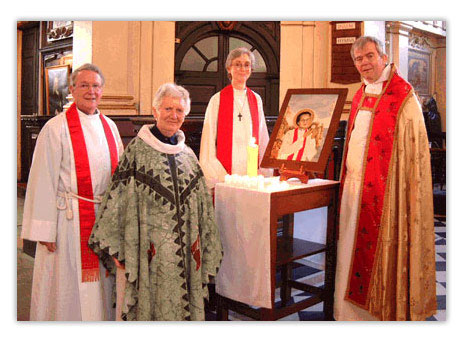 On 24th January 2004 an icon of the Revd Dr Florence Li Tim-Oi was dedicated at St Martin-in-the-Fields, London. It had been written by the Revd Dr Ellen Francis Poisson, Order of St Helena, New York. The icon can be visited in the Dick Sheppard Chapel in the undercroft of the St Martin’s building in Trafalgar Square, London.

With the icon from right to left: the Revd Nicholas Holtam, then Vicar of St Martin-in-the-Fields, now Bishop of Salisbury, who dedicated the icon, wearing the cope made for Bishop R O Hall who ordained Li Tim-Oi in 1944; the Revd Dr Ellen Francis OSH who wrote the icon; Canon Ruth Wintle, then chair of Li Tim-Oi Foundation, who presided at the eucharist, wearing a chasuble from Zimbabwe; Canon Christopher Hall, secretary and founder of the Foundation and son of Bishop R O Hall. Canon Christopher preached at the service, his sermon taking the form of a Letter to Florence Li Tim-Oi.

Worship materials used on that occasion can be downloaded here:

The following are available : read or download the pdf sheet.

‘It Takes ONE Woman’

An 8-page illustrated booklet about the Revd Dr Florence Li Tim-Oi, is available by sending a Stamped Addressed C5 Envelope to Flint House, Selmeston, BN26 6UD or you can either read it or download a copy here

Li Tim-Oi’s story as filmed by the Revd Dr Bob Browne on a return visit to China with Tim-Oi and her sister in 1980. A US-compatible version is available from the Episcopal Media Center or search the web for Video Libraries.

‘Raindrops of My Life’

‘Borne on Eagles Wings – the Faith & Poetry of Li Tim-Oi’

a video by the Revd Dr Bob Browne containing memories of those who knew Li Tim-Oi.

is an inspiring account of the work of the Foundation based on Christina Rees’s 2003 visit to some of the Daughters of Li Tim-Oi in East Africa.  Download a copy.

A Flower for Florence

In 2007 the BBC Radio 4 Sunday Programme launched a competition to name a new dahlia that had just been created. A listener and strong supporter of women’s ordination, Mrs Marion Simpson, wrote in to suggest that the flower be called ‘Florence Li Tim-Oi’. She encouraged all her friends to spread the word and write in to the BBC. ‘Florence’ was chosen as the official name of the new dahlia.

The Foundation asked the Rt Rev Barry Rogerson, who as Bishop of Bristol ordained the first women as priests in the Church of England on 12th March,1994, to bless the dahlia:

At the official flower-naming event, Bishop Barry said, ”As a horticulturist my father would have enjoyed this occasion, though his speciality was carnations. Bryn Bowles of West Harptree Nursery has propagated this beautiful new dahlia, and in accordance with the wishes of listeners to the BBC Sunday Programme, it is named after Florence Li Tim-Oi to mark the centenary of her birth. Florence Li Tim-Oi was the first woman in the Anglican Communion to be ordained. In the dark days of the Second World War, when the Anglican Church in Macau was without a priest, she was ordained by Bishop R O Hall.

For many in the long pilgrimage towards the ordination of women as priests in the Church of England, she was a light at the end of a tunnel. After her death, the Li Tim-Oi Foundation was created to support women in the Two-Thirds World, who with few resources make significant and profound change for good in their communities. Folliott Sandford Pierpoint, who died when Florence was ten, wrote the hymn ‘For the beauty of the earth’ in which you will find these lines: ‘For each perfect gift of thine, to our race so freely given, graces human and divine, flowers of earth and buds of heaven,’ which sums up this event. The beauty of this flower is a remembrance of the beauty of Florence’s life and those who have followed in her footsteps – the buds of heaven.”

“Father we give you thanks for the beauty of your creation which you allow human ingenuity to enhance. We name this Dahlia Florence Li Tim-Oi, in memory of one of your servants who led the way for many to follow, for the great benefit to your church and communities throughout the world. Bless, O Lord, this offering, that through it Florence’s memory may be rekindled and her example followed. In the name of the Father, and of the Son and of the Holy Spirit. Amen.”

The photo shows Rita Lee-Chui, holding a fine specimen of the flower named in her sister’s honour.